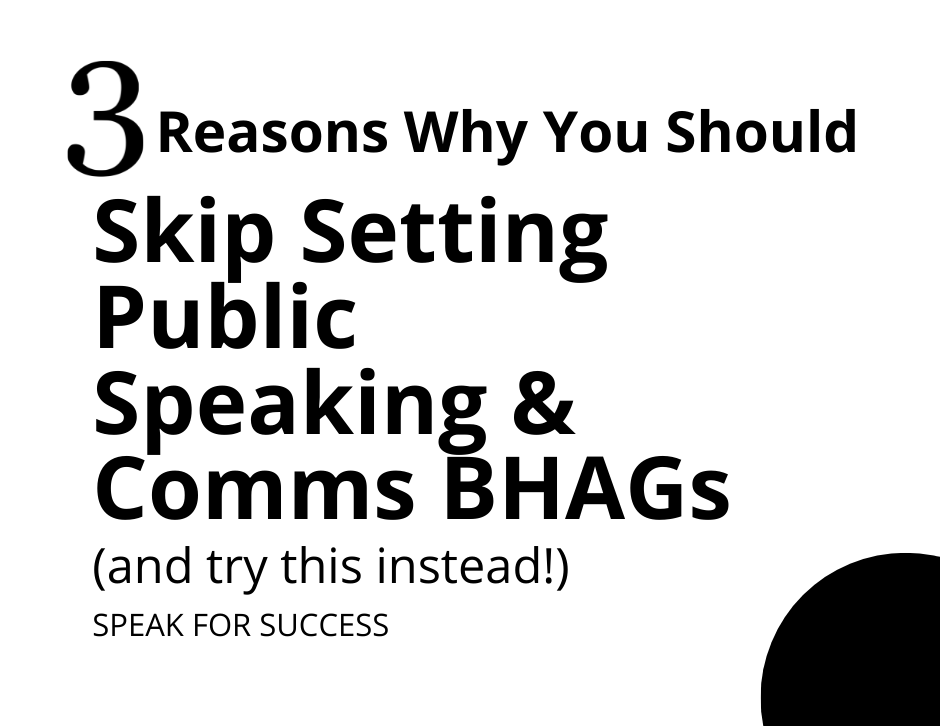 If your inbox looks anything like ours, you’ve already been bombarded with a bunch of year-end emails asking you what your big, hairy audacious goals (aka. BHAGs) are. The pressure to set ambitious goals during this time of year is significant. Some of our members even report feeling like they’re in competition with their colleagues; all vying to set the loftiest, most impressive list (like that one person who announces they’re going to complete an Iron Man and learn Spanish).

Indeed, goal-setting can be an effective way to motivate and trigger action – especially in the workplace. But when it comes to public speaking and communications, we’d argue there are a few problems with this tradition of setting grandiose, BHAGs at the start of each year.

Our suggestion…*spoiler alert*…don’t set one at all and try this instead👇🏻.

1. We can set ourselves up for failure.

Ask any leader, setting a proper BHAG is much more than just scribbling down the outcome we want to achieve on a piece of paper (which, let’s be honest, is what most of us do). It takes careful thought, planning, and (if you’re hard-core) creating a work-back schedule of subgoals. So unless we’re seriously willing to put in the time and effort, then setting a laundry list of public speaking and communication BHAGs can feel overwhelming, trigger feelings of procrastination as well as guilt when we’re not working on them, and shame/sadness if we fail to achieve them. Who needs that?

2. Learning is a process, not an event.

Once a goal is achieved, it’s tempting to check it off our annual goal-list and move on to the next. But learning how to become a better public speaker and communicator is an ongoing process, not a one-off event. It therefore should not end after a predetermined date, or after a box has been checked.

3. It puts unnecessary pressure on ourselves.

Setting public speaking and communication BHAGs when we already struggle to speak up in meetings can be counterproductive by adding unnecessary pressure on ourselves. This is especially true if we don’t have a concrete plan on how we’re actually going to go about achieving them.

So instead of setting public speaking and communication BHAGs in 2022, consider making a few simple commitments to yourself (and actually follow through on them).

In doing so, it will force you to focus on the important day-to-day behaviours and habits that will, over time, build towards skill development. Which ultimately, will add up to major overall performance improvements.

So this year, make a commitment to yourself. Stick to it. And the results will follow (no BHAGs required🤸🏻‍♀️).